Nearly every proof assistant has a problem of the discoverability for proven theorems. For instance, try to recall how a lemma describing the commutativity of addition is called in your favorite proof assistant. Is it add_comm? Or +-comm?

The tracer is a new feature that allows you typechecking a declaration step-by-step. At each step, the IDE shows you the typechecking context for the current expression.

To use the tracer:

Compared to the “Show Expression Type” action, the tracer works in more contexts, shows more info, but could be slower.

The “Arend Messages” panel shows current goals and errors. We did a number of changes that are aimed to improve the UX around it:

This feature is incubating, it may be completely changed in future releases, even minor ones.

The proof terms which appear during the development of some theory may be quite large. It is often hard to read and understand them, so in order to show these terms to the user we sometimes omit certain subterms. A typical example of a kind of these subterms is implicit arguments – they often may be inferred from the context of the term, so displaying them just adds unnecessary noise. However, we also need a way to show these subterms for the purposes of debugging or better understanding the term semantics. Arend allows to configure pretty-printer options by the eye button in Arend Messages toolwindow. 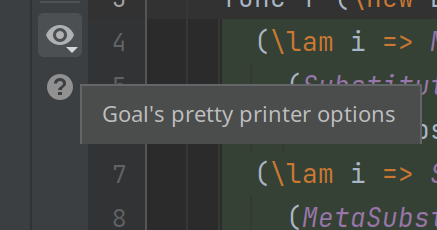 This approach has a flaw: it is done in an all-or-nothing way. You are offered to display every omitted subterm of a certain kind, or not display them at all. Therefore, after changing an option of the pretty printer you become lost in the term.

Arend 1.8.0 offers a solution: we introduce printing customization right in the displayed term. You can put a cursor to a source of omittable subterms and then the appeared popup will help you to uncover what was hidden. Currently it works only for implicit arguments and types of parameters in lambda expression.

Live templates are smart code snippets. They speed up editing by providing a completion for common code patterns. This release includes such templates for the majority of Arend keywords:

In addition, you can define your own templates in “Preferences | Editor | Live Templates | Arend”: 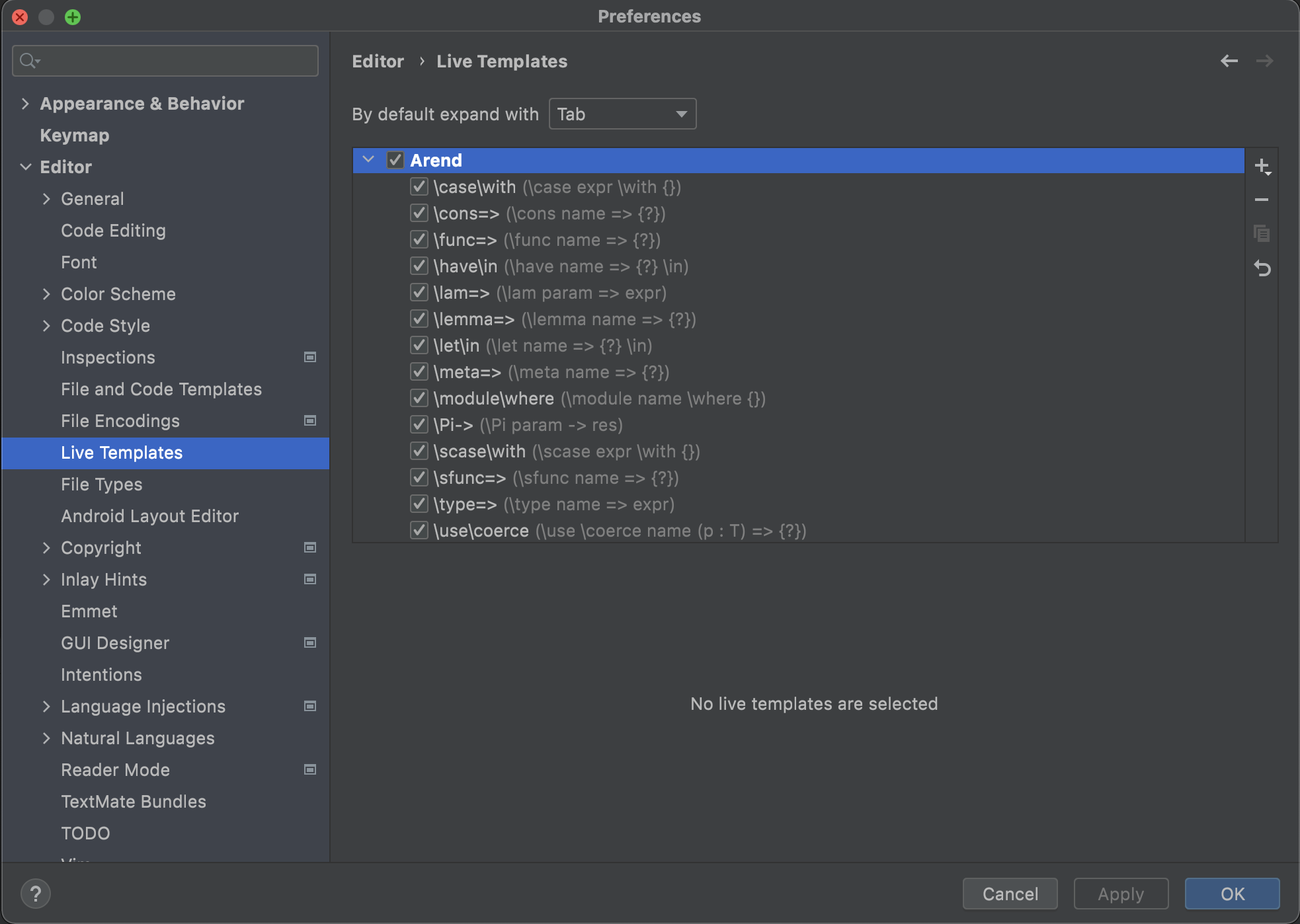 Keeping imports clean is easier with this release. The IDE detects unused imports and highlights them in grey color. To remove such imports use the new “Code | Optimize Imports” action:

Aside from just removing, this action can optimize the imports in various ways, for example, import all declarations from a module explicitly. See “Preferences | Editor | Code Style | Arend” for the options.

If you have a complex expression and want to extract some of its parts into \let bindings, the new “Create \let-binding” intention is there to automate the process:

Generate function from a goal with arguments

The “Generate function from a goal” intention is smarter now. When you invoke it on a goal with arguments, the resulting function will get parameters corresponding to those arguments:

There is a new tutorial on interactive theorem proving with IntelliJ Arend. Check it out to learn about the features of IntelliJ Arend that speed-up theorem...

Language updates: Implicit lambdas. Tests directory can be used to store files with tests, examples, and other code which is not a part of the library. ...

The second part of our tutorial is ready.

We implemented language extensions. This can be used to implement custom operations on the abstract syntax tree which are not supported by the language. They...

The first part of our tutorial is ready

We finished the first part of our new tutorial. It covers all the basic constructions of Arend. It does not mention anything related to homotopy theory. This...

Arend now has proof irrelevant universe of proposition and the plugin can run the typechecker automatically in background.

The first version of Arend is released!